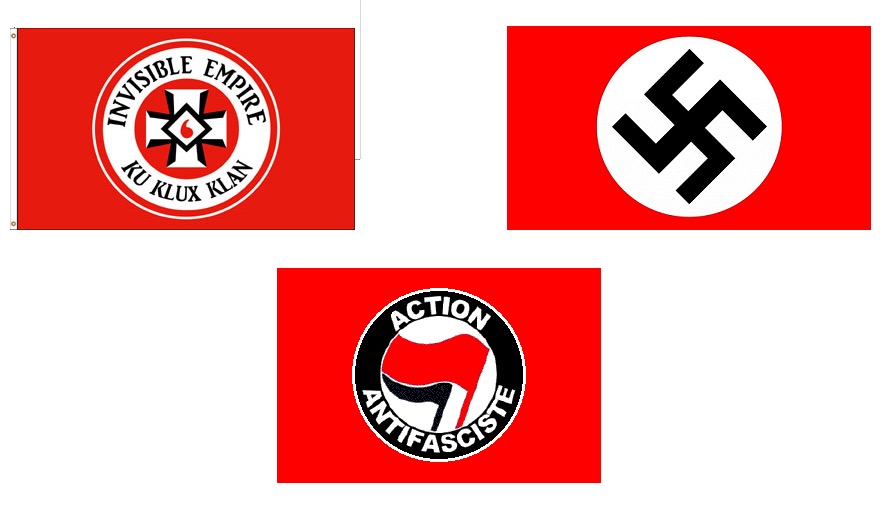 Fascists calling themselves anti-fascists is the ultimate, ironic deception. So many Americans have bought the lie… hook, line and sinker.

This loss of perspective follows the steady blurring and shuttering of America’s history. Engineered ignorance has enabled radical leftists to rise again, this time from the ashes of the KKK and Nazi fascism.

Most Americans consider the small cabal of KKK members and neo-Nazis to be beacons of right-wing racism and hatred. They are wrong. These have always been leftist groups.

Nazi’s were and are leftist, fascist, socialist supremecists. The KKK was and is a fascist, racist supremecist organization, born in the bowels of the Democratic Party. These are facts, not opinion.

If you doubt this, you need to do your homework, because you have been deceived.

The deception continues today in a most brazen fashion. Antifa, the so-called Anti-Fascist movement, born and bred in early 20th century Marxist propaganda, has emerged ever stronger amidst social upheaval in Europe. It now has gained a foothold in America, living and portraying a lie of epic proportions.

Just as the KKK was the paramilitary arm of the Democratic Party in the early 20th century, Antifa has emerged as the strong armed enabler of the 21st century leftists.

From Jeffrey Lord, in The American Spectator:

“In other words, yet again, for the umpteenth time in the history of the American Left, it has turned to violence. And just as the paramilitary and hooded Ku Klux Klan was used as, per Columbia University historian Eric Foner, “a military force serving the interests of the Democratic Party” and, according to University of North Carolina historian Allen Trelease, the “terrorist arm of the Democratic Party,” so now the hooded-fascists of Antifa are being used as a paramilitary organization designed to further the Left’s political agenda by force.”

Strengthened and emboldened by the silent, tacit approval of the Democrats and an agenda-driven media, they are often portrayed as moralists fighting oppression and hatred, embodied in those who simply disagree. Textbook fascism.

These people are not idealists protecting us from hatred. They are thugs. They are “useful idiots”, an apt phrase typically attributed to Lenin. Ignorance can go a long way when recruiting and mobilizing the angry masses. He once said that capitalists would sell him the rope with which to hang them. 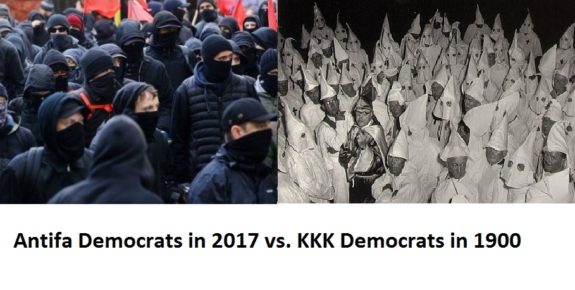 Leftists of today have mastered this technique. All they had to do was focus this base anger on their objectives and their agenda. With simple acts of deception and misdirection, they have mobilized an army of morons obsessed with delusions of morality and superiority.

Unless people in the Democratic Party and the Media begin to call out these people for what they are, instead of perpetuating the lie, the movement will only strengthen and grow more dangerous.

Without a knowledge of history, citizens around the world are being drawn in to participating in the next destructive move toward fascism and totalitarianism.

While they ride their high-horses of humanity, oblivious to what brought them to this point, perhaps only the ugly reality they create will convince the world to step away. But by then it may be too late.

Freedom and individual rights are under attack using the oldest trick in the book: deception. Up is now down. Down is now up. How did people in this Age of Information become so gullible and stupid?

Knowledge is power, but ignorance is a powerful weapon for opposition and overthrow. The world is being “dumbed down” for this purpose, and it’s working.

For Your Viewing Pleasure: